Follow the trail of John Paul II and find out more about his life. Discover his favourite places in Poland, the country where he started his story. 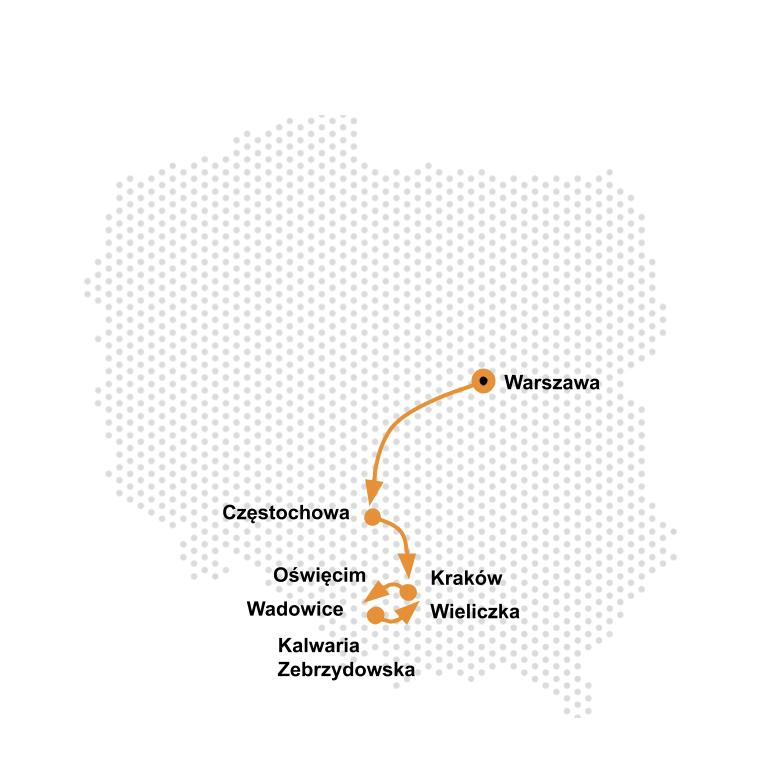 Visit to the Polish capital — Warsaw, and its main monu­ments and points of interest. The tour starts with a walk around the Lazienki Royal Park. Here we will see the famous monument of Frederic Chopin, the Palace on the Water and the Theater on the Island. Transportation to the old Jewish part of the city: the former ghetto and monu­ments in honor of the mar­tyrdom of the Jews during the Second World War, as the Umschlagplatz and the Ghetto Heroes Monument. We will con­tinue to the Old Town (UNESCO) and to a short walk around it: from the Royal Castle, passing next to the Saint John Cathedral, the Market Square and the bar­bacane to the New Town. Return to the Saski Garden and Pilsudskiego Square, where John Paul II cel­eb­rated Mass during his first pil­grimage to Poland, when he uttered his famous words: “Let your Spirit descend and renew the peace on earth, this earth”. Such words found them­selves out after the fall of com­munism in Poland.

Czestochowa is known for the famous Pauline mon­astery of Jasna Gora that is the home of the Black Madonna painting, a shrine of the Virgin Mary. She is the Queen of Poland that the whole nation and country was entrusted to. This spir­itual capital of Poland every year attracts thou­sands of pil­grims from all over the world. During your trip you could visit: the Basilica with Black Madonna Shrine, the exhib­ition devoted to the 600-years of the Monastery, the Armoury Room and the Treasury Room.

Krakow, the old Polish capital, earned the title of World Heritage in the first list created by UNESCO. The city is extremely linked to the life of John Paul II, who lived there during his youth and where he was appointed bishop and met­ro­politan of Krakow. Visit to Wawel Hill, where we can find the Royal Castle and its for­tified courtyard — the former headquarters of the Kings of Poland — and also the cathedral. Our tour con­tinues through the Market Square in the Old Town, with its iconic land­marks such as Sukiennice Cloth Hall, St Mary’s Church and Town Hall Tower. During the tour you will see Barbican and defensive walls with Florian’s Gate as well.

Visit the museum of Auschwitz-Birkenau (UNESCO), the famous con­cen­tration camp and exterm­in­ation, a symbol of terror, gen­ocide and holo­caust. Built by the Nazis in 1940 on the out­skirts of the city, Auschwitz was the place of sac­rifice of four million people from dif­ferent European coun­tries. Visit to the place where St. Maximilian Kolbe was mar­tyred and the monument to the victims, in which three Popes: John Paul II, Benedict XVI and Francis prayed when they visited the camp during their first pil­grimage to Poland.

Transfer to Kalwaria Zebrzydowska and Wadowice.

Visit to Kalwaria Zebrzydowska (UNESCO) — an excep­tional place and a famous sanc­tuary of the Via Crusis. The beau­tiful ensemble of pic­tur­esque chapels, inserted in the beau­tiful land­scape of the Beskidy moun­tains is an example of the perfect union of material culture and the spir­itual and reli­gious sphere.

Visit to John Paul II Family Home Museum in Wadowice — Karol Wojtyła, the son of Emilia and Karol Wojtyła, was born on 18th May 1920 in an apartment building in 7 Koscielna Street, Wadowice. Today it fea­tures a Family Home Museum of John Paul II. Its heart is the flat rent by the future Pope’s parents since 1919, con­sisting of a kitchen, a bedroom and a living room. It has been equipped with fur­niture from the era and genuine Wojtyła family mem­or­abilia such as Emilia’s hand-made lace napkins, her handbag and gold locket, tableware and family photos.

Transfer from Krakow to Wieliczka the most beau­tiful and the oldest oper­ating salt mine in the world (UNESCO Heritage). From over 700 years it was a source of Polish fortune and a physical fun­dament of culture. Today Wieliczka is the most will­ingly visited Polish tourist object with mag­ni­ficent chapels, charming under­ground lakes and ori­ginal tools and equipment. During this tour you could see a number of excavated chambers on 3 levels adorned with beau­tiful sculp­tures made of salt as well as a salt museum. Transfer back to Krakow.

Transfer to the Balice airport in Krakow.
END of SERVICES.