Discover the charm of Polish highways & byways combining the beauty of nature with heritage of the past. Take part in culinary workshops, classical music concert,  boat ride under the ground in an old silver mine. 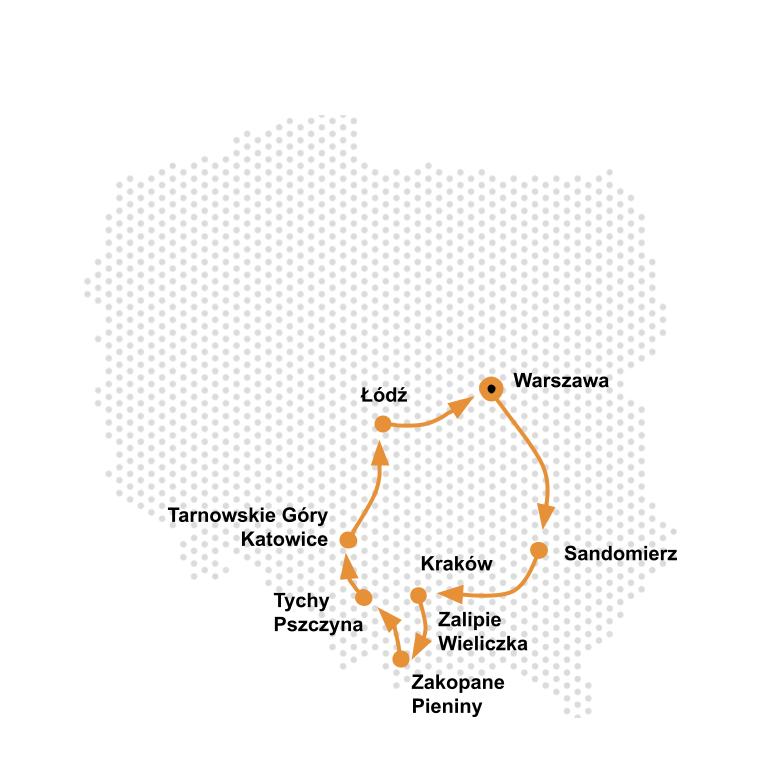 Visit of the capital city of Poland — Warsaw. During this tour, we will visit the most important spots in the city and will have an oppor­tunity to become acquainted with the some­times tragic past of Warsaw and the history of Poland. We will start our tour by vis­iting the Old Town, which is a UNESCO World Heritage Site and the New Town. We will con­tinue our journey to Krasinski Palace, the Supreme Court building and the Warsaw Uprising Monument. After that, we will go to the Lazienki Royal Park where we will see the famous monument ded­icated to Frederic Chopin where we will have an oppor­tunity to relax in the beau­tiful rose garden and among the dazzling natural ele­ments of the park. You will truly forget that you are in a major European Capital City.

Nestled in the cobble­stone streets of the Old Town of Warsaw stands a unique neo­clas­sical concert hall with ori­ginal “plaster stucco” walls, crystal mirrors, and stylish nine­teenth century dec­or­a­tions. As you walk through the doors, you will step into the era of Chopin for a two-part ensemble of Chopin’s greatest pieces played by inter­na­tionally recog­nized pianists. During the inter­mission, you will be invited to a glass of sparkling wine, orange juice, or water. This concert is both a perfect start and/or fin­ishing touch to a romantic evening in the Old Town. If you are starting your night with the concert, you may choose to end it in one of the many res­taurants that our beau­tiful old town has to offer.

Visit to the ruins of Krzyztopor castle in Ujazd. It is nick­named „cal­l­endar castle” as had 356 windows as days in a year, 56 rooms as weeks in a year, 12 big chambers as months, 4 towers and seasons. This 17th century res­idence build in Italian style palazzo in fotrezza was the biggest palace in Europe before Versailles close to Paris was build.

After short visit we proceed to Sandomierz, one of the most ancient cities in Poland that pre­serves the urban plan of Middle Ages. It is known as the capital of the Striped flint (in Polish: Krzemień Pasiasty) that appears only here, in the Sandomierz land in Poland. Due to its rarity it is called “the Polish diamond”, even though it is even more rare than the diamond.

Discover the secrets of the under­ground route in Sandomierz. Under the Main Square, there is a whole network of cellars excavated and used in the Middle Ages to store and refri­gerate products. They also served as a refuge in dan­gerous situations.

In the evening we con­tinue to Baranow Sandomierski.

On the east bank of the Vistula River shines the most valuable and most beau­tiful of former Polish magnate res­id­ences – the Castle in Baranow Sandomierski. This impressive example of the renais­sance archi­tecture is one of the best pre­served objects in Europe.

After breakfast take in the fine views of Polish coun­tryside en route to the village of Zalipie. This pic­tur­esque little town has been enchanting its vis­itors for the past 80 years with its exquisite tech­niques of folk painting used by the locals to dec­orate their houses with col­orful flower designs. Visit the Painters’ hut–museum to find various examples of tra­di­tional folk art of the area.

After a stroll through the village enjoy a tra­di­tional homemade lunch.

In the afternoon transfer from Zalipie to Wieliczka.

Wieliczka the most beau­tiful and the oldest oper­ating salt mine in the world (UNESCO Heritage). From over 700 years it was a source of Polish fortune and a physical fun­dament of culture. Today Wieliczka is the most will­ingly visited Polish tourist object with mag­ni­ficent chapels, charming under­ground lakes and ori­ginal tools and equipment. During this tour you could see a number of excavated chambers on 3 levels adorned with beau­tiful sculp­tures made of salt as well as a salt museum.

Accommodation in a hotel cent­rally located on Krakow.

Krakow is the cul­tural capital of Poland with Old Town listed as UNESCO Heritage. During the tour you would see Barbican and defensive walls with Florian’s Gate, the Main Market Square with Sukiennice Cloth Hall, St Mary’s Church and Town Hall Tower. We would proceed to the Jagiellonian University, pass by Archbishop Palace (where John Paul II used to live) as well as St Andrew’s Church and St Peter and Paul’s Church to reach the Wawel Hill.

In the afternoon visit to Kazimierz dis­trict of Krakow. Kazimierz used to be a sep­arate town close to medieval city of Krakow. It was mostly pop­u­lated by Jewish com­munity. Throughout years it became Krakow’s dis­trict, but the abundance of markets, syn­agogues and kirkuts (Jewish cemeteries) shaped char­acter of this part of town. As Kazimierz depicts the history of Polish Jews, some shots of Steven Spielberg Schindler’s List were cap­tured here. During this tour you would dis­cover this charming part of Krakow with its monu­ments and com­plexed history.

At the end of a day we would have a *culinary workshop of “obwar­zanek”*, the tra­di­tional bajgle of Krakow. Not only we would learn the history of it, but we would have a pos­sib­ility to make them and taste them afterwards.

Accommodation in a hotel cent­rally located on Krakow.

Transfer to Pieniny, the mountain range situated in southern Poland and northern Slovakia. Characterised by a variety of lime­stones builds pic­tur­esque, ver­tical white rocky walls along the Dunajec River with the highest peak of Three Crowns (982 m). It is an ideal place for relax­ation in every season of the year. The most beau­tiful part of the mountain range with a unique land­scape and many natural fea­tures is pro­tected by the Pieniny National Park. The main attraction of this region is the rafting down the Dunajec River which is the most scenic river rafting routes in Europe. After arriving in Sromowce Wyżne, you will start your trip on tra­di­tional wooden rafts, the con­struction of which has remained unchanged for more then 200 years. Be inspired with a nature and exper­ience unfor­get­table moments listening to the stories and old legends from raftsmen (flisaks).

Further transfer to Zakopane, called the capital of Tatra mountains.

Accommodation in a hotel cent­rally located in Zakopane.

Zakopane is a town lying at the foot of the Tatra Mountains – the highest mountain range of the Carpathians. Because of the breath­taking land­scapes, vicinity of the moun­tains and the fas­cin­ating culture and tra­dition of the high­landers, Zakopane became a popular tourist resort years ago. The town gained the title of “the winter capital of Poland” due to many skiing slopes and the winter sports infra­structure that has been developed. Nevertheless, it is a perfect place to get away from bustling cities at any time of the year, because the Podhale region has a lot to offer even to the pickiest travelers.

Accommodation in a hotel cent­rally located in Zakopane.

Pszczyna Castle is a 13th century gothic castle, later rebuilt in a renais­sance style and finally adorned from the outside in a baroque style. It was a res­idence of Polish Piast nobles. In 2009 it was voted as one of the “Seven Architectural Wonders of the Silesian Voivodeship” by the Silesian author­ities and is often described as one of the most beau­tiful castle res­id­ences in Poland.

Transfer to the brewery in Tychy.

Discover the secrets of one of the largest Polish brew­eries and taste the most typical Polish beer brand – Tyskie, which name comes from this city!

Katowice – this indus­trial city is known for dis­covery of rich coal reserves, at the same time is the real mixture of cul­tures: Polish, German & Jewish. It is a centre of science, culture, industry, business and trade and was named a UNESCO City of Music. Sightseeing of Nikiszowiec area, part of Katowice city.

Accommodation in a hotel cent­rally located in Katowice.

In the morning visit to Tarnowskie Gory.

Tarnowskie Gory – the city known for his­toric lead-ore mining. It’s silver mine is in the UNESCO Heritage List since 2017. The visit in Historic Silver Mines starts in an inter­active museum where tourists get the know­ledge of methods of silver. It pro­ceeds with going under­ground. The trail is 1,749 meters long; 270 meters are trav­elled by boats.

Lodz is one of the biggest Polish cities. During your visit you would find traces of the four cul­tures: Polish, Jewish, German and Russian that coex­isted there and became one. Furthermore, you would admire mod­ernist and indus­trial arqui­tecture. Thanks to its numerous factories, Lodz was also called the „Polish Manchester”. During the route you would see the Old Town and the indus­trial complex of Poznanski family, the famous Manufaktura. Next, you would visit the Scheibler fabric complex „Księży Młyn” that is a great example of the revital­iz­ation of the city during the last years. In the end, you would dis­cover Piotrkowska Street, the most popular walkway full of shops, pubs, res­taurants and sculp­tures that com­mem­orate famous inhab­itants of Lodz. Transfer to Warsaw.

Accommodation in a hotel cent­rally located in Warsaw.

Transfer to the airport in Warsaw.
END of SERVICES.