Discover Poland with this 10-day route that allows you to discover the rich history of Poland, its fantastic cities, fairytale, colourful towns and its impressive landscapes. 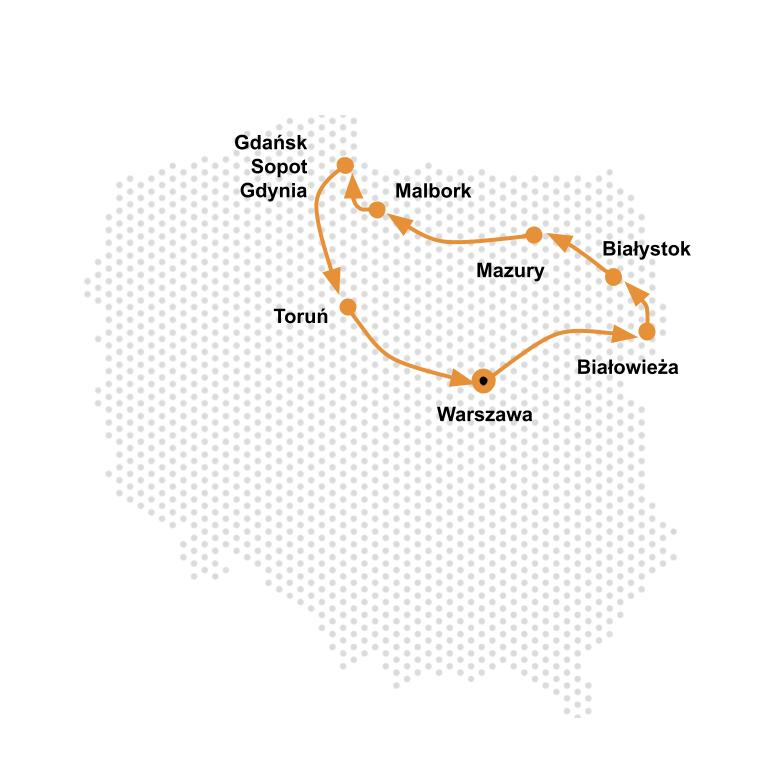 Visit Warsaw — the capital city of Poland. During this tour, we will visit the most important spots in the city and will have an oppor­tunity to become acquainted with the some­times tragic past of Warsaw and the history of Poland. We will start our tour by vis­iting the Old Town, which is a UNESCO World Heritage Site and the New Town. We will con­tinue our journey to Krasinski Palace, the Supreme Court building and the Warsaw Uprising Monument. After that, we will go to the Lazienki Royal Park where we will see the famous monument ded­icated to Frederic Chopin where we will have an oppor­tunity to relax in the beau­tiful rose garden and among the dazzling natural ele­ments of the park. You will truly forget that you are in a major European Capital City.

In the evening we invite you for a Chopin Concert. Nestled in the cobble­stone streets of the Old Town of Warsaw stands a unique neo­clas­sical concert hall with ori­ginal “plaster stucco” walls, crystal mirrors, and stylish nine­teenth century dec­or­a­tions. As you walk through the doors, you will step into the era of Chopin for a two-part ensemble of Chopin’s greatest pieces played by inter­na­tionally recog­nized pianists. During the inter­mission, you will be invited to a glass of sparkling wine, orange juice, or water. This concert is both a perfect start and/or fin­ishing touch to a romantic evening in the Old Town. If you are starting your night with the concert, you may choose to end it in one of the many res­taurants that our beau­tiful old town has to offer.

Collection of the rental car at the hotel. Departure towards Bialowieza.

Bialowieza National Park — The king of national parks in Poland and in Europe is Białowieża National Park. It is not only one of the oldest on the con­tinent (created in 1932), but also the only place where the European bison lives in freedom (it cur­rently has more than 300 copies) and where it is con­served, in strict reserve, the called prim­itive forest, part of the park that has not been altered for 400 years by human activity.

Entrance to the Natural History Museum of Bialowieza National Park.

Accommodation in a cent­rally located hotel in Bialowieza.

Departure in the dir­ection of the Podlasie region.

A part of the Podlasie region is known as the Land of Open Shutters. The vil­lages are inhabited by indi­genous Podlasie people, mostly Orthodox, who identify them­selves as a Belarusian minority. The inhab­itants use the Podlasie dialect on a daily basis, which is slowly dis­ap­pearing. This place is famous mainly for the orna­ment­ation of wooden houses. The col­orful shutters, richly dec­orated gables and gabled house corners, porches and man­i­cured farm­houses, which are unique in other parts of the country, reflect the spatial arrangement of Queen Bona’s times. All this is immersed in the silence and greenery of gardens with hol­ly­hocks, asters and peonies.

Kruszyniany is a town located on the Tatar Way. It is mainly char­ac­terized by the cul­tural and reli­gious diversity of the inhab­itants, but also by the beauty of the sur­roundings. Here is an oppor­tunity to try unusual Tatar cuisine in a local res­taurant. The main attrac­tions of Kruszyniany are the mosque and the mizar, the Tatar cemetery. The mosque dates back to the 18th century, but its history dates back to King Jan III Sobieski. The building is pre­served in excellent con­dition, you can also visit its interior.

Transfer to Bialystok with stopover in Tykocin

Tykocin is, a charming city with a special atmo­sphere. Today it looks exactly like before World War II. One can still admire king’s castle, 18th century mon­astery and church, aston­ishing 17th century syn­agogue as well as wooden houses more than 100 years old. The Jewish com­munity was formed here in 16th century and it con­sti­tuted a great cul­tural center, becoming one of the largest Jewish com­munities in Poland. The syn­agogue of Tykocin is the second largest syn­agogue in Poland after that one in Krakow.

Accommodation in a cent­rally located hotel in Bialystok.

Bialystok is the largest city in the region of north-eastern Poland. It is sur­rounded by a beau­tiful natural area called the Green Lungs of Poland which is full of tourist attrac­tions. The loc­ation nearby Lithuania and Belarus had a sig­ni­ficant influence on the his­torical and present func­tioning of the city itself and the entire Podlasie region. Many dif­ferent cul­tures, reli­gions and nation­al­ities have lived here for cen­turies. During a sight­seeing you could have a chance to see Branicki Palace , the most valuable monument of Bialystok, also known as the Versailles of Podlasie, the Old Market area and the Town Hall.

Beautiful Masuria region is boasting of more than 2600 lakes and beau­tiful nature. Wind and wild aquatic birds make more of a ruckus here than people. This is a perfect place for your rest.

Accommodation in a cent­rally located hotel in one of the Masurian cities.

Free day to dis­cover the beau­tiful region of the lakes.

Wolf’s Lair was the Adolf Hitler’s Headquarters built in 1941 in the middle of Masurian forest to facil­itate planned German invasion on Russian Soviet Union and coordinate warfare on new eastern front. It was the place where many important stra­tegic decisions were made by German dic­tator and his top gen­erals. Here in 1944 famous, failed assas­sin­ation attempt on Hitler, carried out by Claus von Stauffenberg took place. Wolf’s Lair complex which con­sisted of bar­racks, air­ports, railway station, power station etc, was destructed in 1945 but its impressive ruins are today available for sight­seeing. It is a perfect tour for those who want to learn more about the history of World War 2 and exper­ience some­thing unique.

Accommodation in a cent­rally located hotel in one of the Masurian cities.

Malbork Castle is the medieval capital of the Teutonic Order in Eastern Europe. You will have a guided visit to the biggest red brick gothic castle in the world which earned it the title of being a “UNESCO World Heritage Site”. This is not only your chance to admire beau­tiful archi­tecture, but also to exper­ience what life was like in the past, see their tech­nology, and an antique col­lection of arms. The Castle’s cellars also host the “History of Amber” exhib­ition presenting an astounding col­lection of Baltic Sea amber including jewelry, and other products made out of amber.

Accommodation in a cent­rally located hotel in Gdansk.

The charm of Old Town Gdansk attracts mil­lions of tourists each year. We will start by taking a walk down Długa Street, which is one of the most beau­tiful European markets that is nestled around a dazzling selection of renais­sance buildings. It leaves from the Golden Gate and passes by the Town Hall, Neptune fountain, Arthur’s Court and fin­ishes by the Green Gate over­looking the Motława River. On a way you may visit The Museum of Arthur’s Court and the Amber Chamber at which point, you will see an amber pol­ishing demon­stration with a short lecture on amber. The tour con­tinues to the Old Crane, which happens to be one of the most popular symbols of the city. After that, the tour fin­ishes at the church of St Mary, Europe’s biggest gothic brick church.

Later you can visit Oliwa Cathedral, the longest Cistercian church in the world, which is famous for its organs and organ concert. Transfer to Gdynia harbor and visit the sail powered ship “Dar Pomorza” and transfer to Sopot seaside resort. Once we arrive, you can walk along the longest wooden pier in Europe.

Accommodation in a cent­rally located hotel in Gdansk.

Departure in the dir­ection of Torun.

Visit Torun, the best example of medieval gothic town (UNESCO Heritage) and birth­place of great Polish astro­nomer Nicolaus Copernicus who made a crucial dis­covery that the Earth is not the centre of uni­verse. During the walk along the Old Town we would visit the Copernicus House and the Cathedral with a bell tower offering a splendid view over the city. Time for a souvenir hunt could be a chance to try ginger­bread — a spe­ci­ality the city is famous for, that is baked according to old recipes and methods dating back to the 16th century.

Transfer to the airport in Warsaw.
END of SERVICES.